On Monday 18th October, IPM Junior Fellow Joe Barratt attended the Greater Manchester Green Summit at the Lowry, Salford Quays. The event was hosted by Andy Burnham, the Mayor of Greater Manchester, who spoke about the urgent need to accelerate the region’s response to the climate crisis, in order to create jobs, improve homes, overhaul our transport system and make Greater Manchester an even better place to live.

Now in its fourth year, this year’s GM Green Summit featured a range of discussion panels that focused on steps we can all take to reduce our carbon footprint and improve our environment. The event also showcased many of the great actions that have already been taken so far, as well as the challenges and pace of change still required for the city region to reach its goal of becoming carbon neutral by 2038.

A central part of Greater Manchester’s proposed Levelling Up Deal to the government, which was highlighted during the conference, includes delivering a “London-style transport network with affordable London-level fares”. If the deal is implemented, it will remove a million tonnes of carbon from the region’s economy by delivering heat decarbonisation, smart energy and retrofit programmes, and by shifting towards electric buses, trams and taxis, will move the region quickly towards a zero-carbon transport system.

As road transport generates nearly a third of all carbon emissions, there is an urgent need to make significant changes in our travel behaviour over the coming years. Streets for All, a campaign which sets out to make streets in Greater Manchester easier for everyone to get around, had an active presence at the summit. Whilst most people would agree with the ambition to put people first as we shape and manage our streets, the team behind the campaign admit that some tough decisions need to be taken which challenge the status quo. In certain places, that will mean reducing the number of cars to provide more safe space for sustainable and active modes of transport, such as walking, cycling and public transport. More information on the Streets For All strategy can be found here.

Speaking at the event, Cllr Neil Emmott, the Leader of Rochdale Council and GMCA Lead for the Green City Region, said "Reaching net-zero carbon emissions is more than just an environmental issue. Hitting our target will transform lives in Greater Manchester, levelling us up to one of the best and greenest places in the country. It will improve health outcomes, tackle inequalities and generate secure good quality jobs.”

Rochdale Council also had a stall as part of the marketplace of organisations showcasing the efforts they have made towards achieving a net-zero future. The stall highlighted the work they have achieved by working in partnership with the local community on the delivery of the Littleborough Arts Festival. The Arts Festival, which has run in Littleborough, Rochdale, for 20 years was cancelled last year due to the pandemic - but returned in 2021 with the theme of “Under the Sea” in order to engage residents with climate change, as the area has regularly experienced high-levels of flooding after heavy rainfall.

The festival commissioned four artists from Ebor Studios in Littleborough to create a story trail around Hare Hill Park and connected ten local artists up with businesses in the town to showcase art in shop windows. Local resident and Chair of the Littleborough Arts Festival, Steph West, said “We were trying to come up with events that would involve as many people as possible - shop windows are very accessible, without having to go to a gallery or space. We wanted to showcase local art, create something positive and get people thinking about climate change and the environment, including rising sea levels in future.” Sybil the Whale, an interactive light art installation commissioned for the festival, had a starring role at the conference as it was paraded around the foyer by festival volunteers. 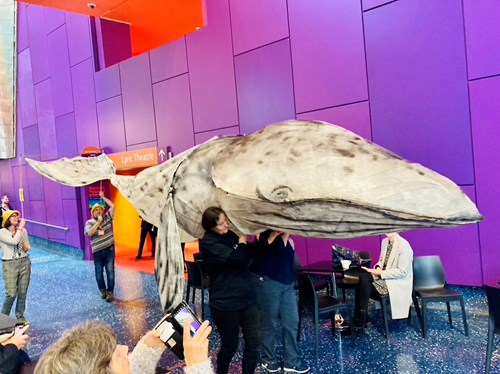 Other organisations promoting their work to tackle climate change included the GC Business Growth Hub, Bolton Council and Manchester Metropolitan University. Recycle for Greater Manchester also had a presence through their ‘Renew Shops’ campaign, which has set up shops in Altrincham, Oldham and Eccles which sell pre-loved household items donated by residents that would have otherwise gone to waste.

Speaking after the event, IPM Junior Fellow, Joe Barratt, said “It was fascinating to attend the Greater Manchester Green Summit and hear more about the plans that the region and towns of Greater Manchester have to become net-zero by 2038. What is increasingly clear is the important role that place management has to play in making our towns and high streets become more environmentally resilient and sustainable, turning net-zero strategies into on-the-ground action. This event helped highlight the great work that has been achieved across the region in time for COP26 but, whether you’re a local councillor, council officer or BID Manager, I think there is more that we can all be doing to help tackle the climate crisis.”

More information about the GM Green Summit event can be found here: https://gmgreencity.com/

Formed in 2006, the Institute of Place Management is the international professional body that supports people committed to developing, managing and making places better.